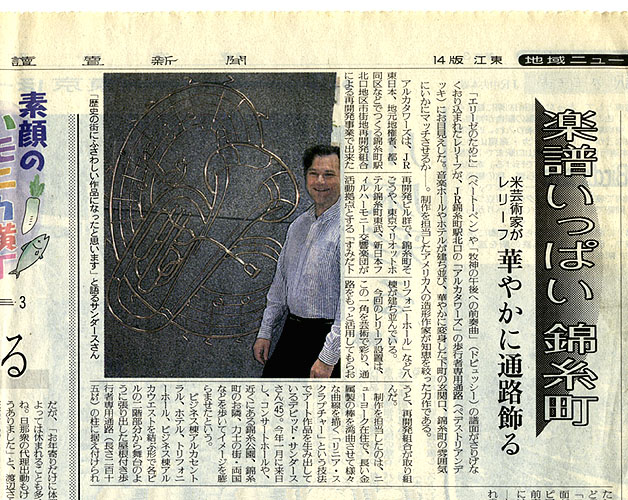 "Songbirds" by David Saunders, 1999
"KINSHICHO IS FULL OF MUSIC"

"The hand-made relief sculptures by the American artist, David Saunders, are a brilliant decoration of Sumida Triphony Hall Plaza. Musical scores, like Beethoven's "Fur Elise" and DeBussy's "Prelude for the Afternoon of a Fawn", are lyrically woven throughout the sculptures, which have appeared in the pedestrian plaza at the North Entrance of JR Kinshicho Station. A tour de force by the American artist who had racked his brain to incorporate the atmosphere of Kinshicho. This entrance to the busy downtown area has changed sensationally by the artworks as they are installed throughout the complex space which includes the Symphony Hall, several office buildings and the luxurious Tobu Hotel, to unify the entire space.

Mr. Saunders says, "I wanted the artworks to be appropriate for this historical district." Mr. David Saunders, who lives in New York City, has been the originator of a style of sculptural drawings which are created by bending solid metal rods. The artist has personally taken charge of all these works. He says he first nurtured his imagination by walking around the concert hall area, Kinshicho Park and the Sumo Wrestler's Town, Ryogoku, when he visited Japan this past January."